Kinu Nishimura is a Japanese game illustrator and character designer best known for her significant history of work on numerous Capcom fighting games in the 90s. Her designs greatly influenced how many of the most iconic fighting characters would be remembered by a whole generation of gamers, and continues to have a lasting impression to this day.

Despite the huge volume of artwork produced by Kinu Nishimura, details of her life are somewhat scarce. Even her real name is unknown; she uses a pen name based on her grandmother's name.

Nishimura's employment at Capcom began in 1991 while she was studying at Kyoto University of Art and Design. Being into manga at the time, she imagined that she'd become a manga illustrator or work in animation. That changed, however, when she came across illustrations by Akiman (Akira Yasuda) for Magic Sword and Final Fight in one of her brother's gaming magazines, which thoroughly impressed her. Realizing that such talent existed in the game industry, she decided to apply for work with some game companies. She sent some drawing samples of RPG-inspired characters to Capcom, and was hired shortly after.

Nishimura was initially placed in Capcom's sprite and pixel graphics department where she worked on in-game character graphics for Saturday Night Slam Masters, known in Japan as Muscle Bomber: The Body Explosion. Soon after, she got her first taste of illustration work drawing monsters and promotional art for The King of Dragons, as well as doing character designs for Varth: Operation Thunderstorm.

One of Nishimura's first big projects was the arcade side-scroller The King of Dragons.

In 1992, Kinu Nishimura was transferred to Capcom's design department where she worked as the main illustrator for Street Fighter II alongside Akiman, the artist whose illustrations had inspired her to apply to Capcom the year earlier.

Responding to an interview in the Capcom Design Works art book, Nishimura says she felt very lucky to work alongside Akiman, who would frequently praise her work even when she thought it was no good. She credits him with influencing her work and helping her improve as an artist.

Nishimura also had the opportunity to collaborate with fellow fighting game artist Shinkiro (Toshiaki Mori) on the crossover game Capcom vs. SNK. In an interesting exchange of roles, Shinkiro, who was working for SNK at the time, oversaw design of Capcom's characters while Nishimura took on the task of designing SNK's characters. The unique collaboration returned again for the sequel Capcom vs. SNK 2, this time with both artists contributing art for each character in their signature style.

One familiar aspect that is often present in Kinu Nishimura's work is the great energy and personality in her character designs. Commenting on her design process, Nishimura says the most important thing to her is to always make sure that she fully understands a character's individuality before creating her own design for them. She then tries to decide on a goal for the drawing, and follow that idea or feeling through to the end without getting hung up on details along the way. Although, she admits, she isn't always so successful in this area.

The theme of Nishimura's illustrations isn't all fighting and intense moments. She also illustrates the playful side of the characters, such as Kyo and Sakura battling each other on the Neo Geo Pocket, or the girls of Street Fighter frolicking with cats.

Some of her most light-hearted work was created while working on Capcom vs. SNK. The game had a very serious tone, so she tried a more anime-like approach for a few illustrations to offer a balance of happy and carefree moments. She has since illustrated many more playful scenes for art book collections and fan club drawings. 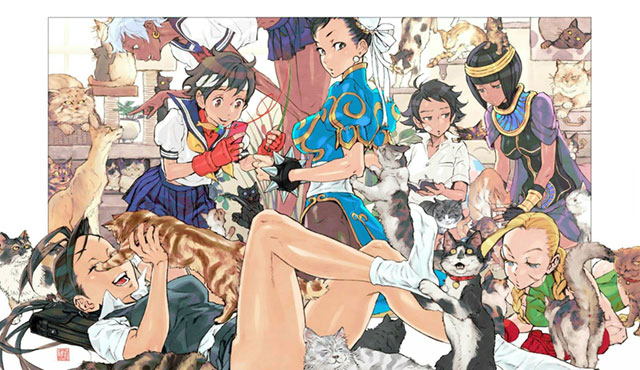 When asked in a Capcom Design Works interview what her favorite characters to design have been, Nishimura explained that many of her designs have been based on other artist's characters, so she doesn't feel like she's created many of her own. She is, however, fond of Dungeons and Dragons: Shadow over Mystara, which she felt she was able to put her best effort into and have a lot of fun with.

She also has good memories of working on Gaia Master, a PlayStation fantasy board game that was released only in Japan, and is proud of the character designs she created for it.

Kinu Nishimura went freelance in 2008 after working at Capcom for nearly two decades. She has continued to work with Capcom on several games and art books since then. However, she has also worked on projects for other companies, such as Zero Escape, Code of Princess, and Culdcept Revolt. Additionally, she has created art for several anime television series, as well as character illustrations for the live stage show Dragon, Dance With Wolves, which was performed in Japan in 2018.