Akihiko Yoshida, born February 15, 1967, is a Japanese game artist renowned for his detailed and oftentimes medieval-themed artwork. His preference for using traditional drawing methods and mechanical pencils has kept his name high on the favorites lists of fans who favor personal style and coarse detail over sleek digital arts.

Yoshida's involvement in the video game industry started at not more than 20 years of age when he landed a minor graphic design role for the PC game Zeliard. The gig grounded a path for a series of similar roles that led to his first major character design job a few years later at game developer Quest. Working at Quest, Yoshida designed all the characters and tarot cards for the SNES tactical role-playing game Ogre Battle: March of the Black Queen. His art style was well-received, and series creator Yasumi Matsuno welcomed his talents back for the next installment, Tactics Ogre: Let Us Cling Together.

In 1997, Yasumi Matsuno left Quest to join Squaresoft, and Akihiko Yoshida followed with him, a move that likely played a part in the closure of the Quest company years later, with it's resources and franchise rights being sold to Square. At Squaresoft, Matsuno created the hugely successful Final Fantasy Tactics, a game that continued the tactical role-playing formula that proved so popular for Tactics Ogre, and Yoshida once again provided full designs for the huge array of character classes and monsters. His illustrations were highly praised and became an instant classic almost overnight. 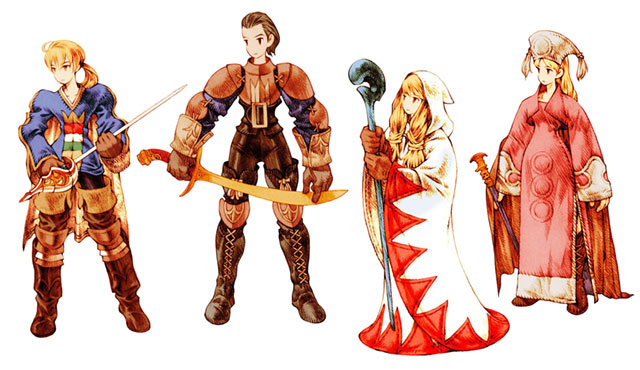 Some of Yoshida's character designs from our Final Fantasy Tactics art gallery.

Yoshida created completely new designs for the formerly generic and faceless Final Fantasy III characters, allowing for their recreation in 3D. Final Fantasy XII demanded an even larger role from him, not only as head of character design, but as supervisor over background design for the game's many cities, dungeons, and fields. His team visited Turkey to style the game's Mediterranean setting from, and studied areas in India and New York City, as well as Arabic and ancient Roman cultures for inspiration.

Some commentators drew similarities between the design choices of Akihiko Yoshida and fellow Final Fantasy artist Tetsuya Nomura for the characters Vaan and Ashe in Final Fantasy XII. Yoshida explained that changes in character design had to be made as the game development progressed, to remain consistent with the series' past design and colors. Bright colors for example, such as the pink in Ashe's outfit, are not usually part of his palette, but were necessary in the feeling and setting of the game.

Normally, Yoshida is most comfortable working with organic and subdued colors when drawing, a choice that compliments the penciled and ages-past look that often define his designs. He has said that feeling comfortable with his subject is important, as he believes in creating something he personally likes, rather than what is popular. To that end, he feels his art isn't really mainstream in Japan, and is actually more suited to Western-style video games.

Yoshida has admitted to being a fan of the art style and direction of Yoji Shinkawa from the Metal Gear Solid games, and has followed the series' design with interest. However, when creating art, he says he tries not to reference other video games in order to keep his designs original. Instead, he draws inspiration from movies, comics, anime, and other forms of art.

Books have been another source of inspiration through the years. He began buying them as a young artist and studied the illustrations with great attention to push his skills and creativity further. He also bought a lot of overseas fashion magazines from secondhand bookstores to use as a reference when designing character outfits.

In 2013, after working at Square Enix for 18 years, Yoshida shocked fans by resigning from the company. The decision, he explained, was made to allow himself to do what he enjoys and keep challenging new subjects rather than being bound by company duties, which had become more and more time-consuming and technical with the evolving development process of games. The following year he joined CyDesignation, a freelance art company and subsidiary of Cygames headed by fellow Final Fantasy artist Hideo Minaba, who had also left Square Enix in years prior.

Yoshida continues to oversee art direction of various projects through CyDesignation as a Company Director, while also working on a freelance basis for other projects, including for his former employer, Square Enix. Such freelance work has included Final Fantasy XIV and its expansions, and NieR:Automata, both of which were very well-received. You can check out our robust collection of art for the games Yoshida has contributed to in the galleries below.

This website relies on the display (not clicks) of ads to survive. If you are using AdBlock, please consider clicking the ABP icon and disabling it for this site. If you wish to support us without seeing ads, you can back our Patreon page for as little as $1. Thanks!